The one extant copy of The Grim Game (1919) starring Harry Houdini has at last been restored into glistening silver glory and brought to the public eye, presented yesterday by the San Francisco Silent Film Society as part of a December Day of Silents at the Castro Theater.  I recently attended the Official Houdini Seance at the Brava Theater on Halloween, which was an exciting opportunity to renew my lifelong interest in the illusionist that began in elementary school.  So watching him perform onscreen was a rare and awesome treat.

An obvious showman, Houdini exudes absolute confidence before the camera and plays himself more than he plays character Harvey Hanford, a newspaper reporter caught in a far-fetched plot to thwart villains who are after his uncle’s fortune.   The film finds, through an otherwise mediocre storyline, every excuse to incorporate many of his classic escape acts:  handcuffs, ball and chain, prison cell, straight jacket, and underwater.  The cinematic medium, an illusion itself, removes most of the inherent suspense that his live stunts must have had, which drew thousands of spectators.  However, Houdini on film still astounds, untangling himself from an adrenalized obstacle course, an early blueprint for Indiana Jones.  One cannot deny the sheer bravery and risk of the climax where he hangs by rope off the wing of a flying airplane and jumps into another airplane below.  Thank you to Rick Schmidlin and Turner Movie Classics for preserving this film for modern audiences to study and enjoy. 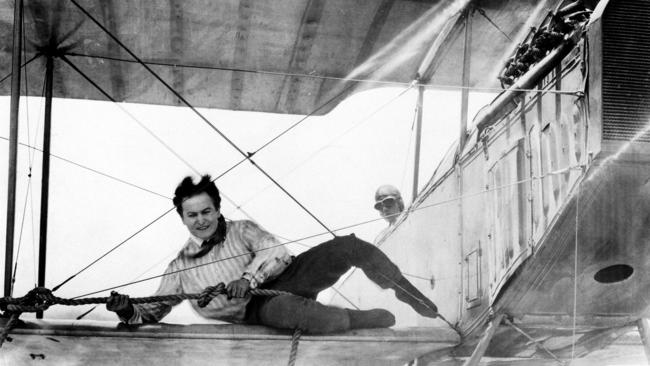