Bikes vs Cars, directed by Fredrik Gertten, investigates global parallels, as well as differences, in transportation policy, crosscutting between Sao Paulo, Los Angeles, Toronto, and Copenhagen.  The title oddly affirms a false dichotomy which the film itself decries.  Interviewee Raquel Rolnik, a professor in urban planning at the University of Sao Paulo, passionately demands a “shift in paradigm” arguing that even electric, non-fossil fueled automobiles reinforce the disastrous impacts of a car-based economy.

The documentary wrings its hands and all too frequently pulls on the heart strings to further its sympathies.  It dwells on one bike rider’s gruesome story of dismemberment, circles back to forlorn scenes of ghost bicycles, then hammers these images in with a dirge-like soundtrack, just in case we don’t get the message.  I would have preferred a deeper investigation based on facts, of the long term effects of climate change caused by carbon emissions and the plausible end of the human race if the car economy continues to run rampant.

Instead, a truer poignancy occurs in breathtaking images of the former Los Angeles Railway, the largest public transportation network of its time, as it was systematically dismantled and then closed in 1946.   And again with the California Cycleway, a long-distance elevated bike freeway built in 1900.  Toronto’s removal of bike lanes in 2012 at the cost of $300,000 to taxpayers also rankles, as part of then-mayor Rob Ford’s mission to “end the war on cars”.  If such imbalance in power between cars and bikes could even be called a war, rather than, say, a massacre, then the film articulates how cars are winning, with their numbers due to multiply in the next decades. 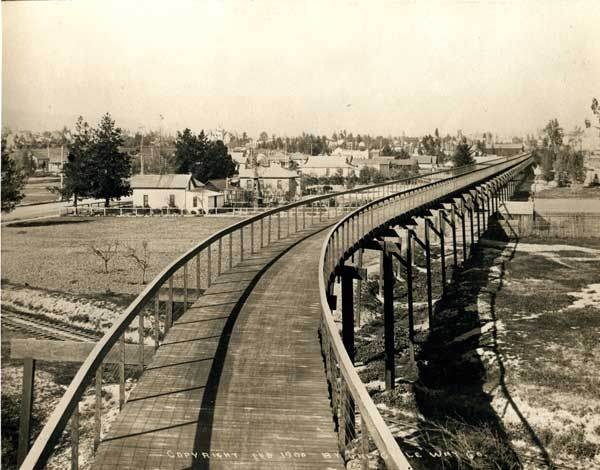 The analysis is effective, but Bikes vs Cars implies that gridlock is our worst fate.  The film carefully paints a future of routine four hour traffic jams in most major cities.  Instead, it could have more potently linked car emissions to climate change.  The continued path of car dependence is literally unsustainable, not just unpleasant.  The world currently creates eight times more carbon than can be absorbed back by the planet, and any study of global warming points to repercussions far more severe than the inconvenience of sitting in bumper-to-bumper traffic.