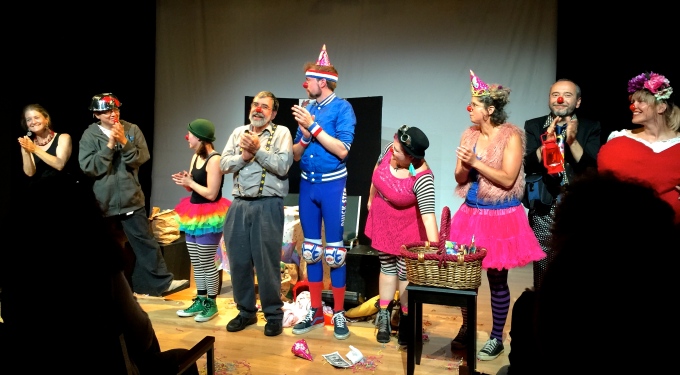 Clown School of San Francisco led by instructor Christina Lewis presented The Game of Life on Sunday afternoon at Theatre of Yugen, a tiny theatre space in the Mission. A better title would have been “A Bag of Laughs”, as almost every act introduced various objects going in or out of a large bag or suitcase. A delightful showcase of clown trainees, it knitted together short autobiographical scenes, each one centered on a solitary struggle:  love, identity, poverty, marriage, neurosis. The best acts were simple, with minimal props, one or two characters, and almost no words.

Clowning requires delicacy and vulnerability, and playing the fool for all to see. Each mini-tale felt deeply revealing, often sad. Michele Salami’s impoverished bag lady uncloaked exquisite pathos as she explored the contents of a grocery bag, sobbing with joy upon discovery of an empty cornflakes box. When she attempted to embrace another clown, her armful of bags and garbage cans made it an impossible gesture. I identified with the excess metaphorical ‘baggage’.

Bob Reis’ character had him dancing with a rubber band, while being watched by an anonymous shifting telescope. Using the simplest of devices, he expressed a desire to play, to be oneself, under the intimidating gaze of a disembodied Other. Society? The feeling was familiar. Only one act, however, evoked outright belly laughs. Performed by Shuly Goldman and Jeroen Van Acker, this sharing-a-bed-too-small gag deftly built on itself, an apt commentary on the difficulties of relationship.

I would love to see these student clowns push further to the heights of giddiness. They are well on their way with their refreshing, authentic material.