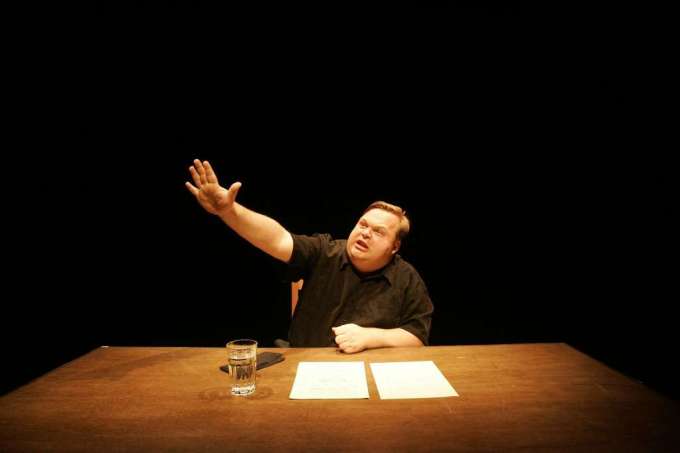 Monologuist Mike Daisey premieres two new works for Shotgun Player’s Blast Theater Festival through February 26. He sits at a table, with a glass of water and notes on yellow paper, then launches into a two hour polemic on the history of journalism, intertwined with personal stories and observations. The piece is pure meta. It’s storytelling about storytelling.  He critiques the larger scandal of the rise of a reality show president, and mentions his own media scandals in passing. He refers to the title of his own show as “clickbait” and structures his verbal tirade around the metaphor of a dying friend. The trajectory of thought is so nuanced and acute, we find ourselves inside the mirror looking out, astonished, as he peels apart the onion of America’s journalistic traditions.

Daisey, a theater artist, understands how theater works. He scrutinizes how journalism perpetuates itself through various theatrical devices, and how it constructs what he deems “the myth of objectivity”.  The myth began after the invention of the printing press, he says, and persisted and reinforced itself through the developments of radio and TV. It obeyed strict, unspoken codes for which voices carried news and how, and consolidated power along the way.

However, because of journalism’s fundamentally unquestioned status for most of the 20th century, it became vulnerable to the invasive rot of Fox News, a network that deliberately told untruths and mixed up opinion and fact. Because mainstream media failed to question its own mythic underpinnings, journalism lost credibility and its hold on a certain audience. Daisey traces its fall, blow by blow.  He asks, has it burned down yet or are we still burning? When do we reach base level?  I am eager to see part two: This is Not Normal, and perhaps find out.