Writer/composer/video artist David Cox, with Art Director Molly Hankwitz and a talented cast of singers and musicians have created Rocket Opera, a rock operetta that musically examines the history of space exploration, specifically during the 20th Century superpower Space Race. The operetta presents three acts titled: Cosmonauts on the Moon, Lunar Modules, and First Women in Space. Each act appeared separately at Other Cinema between 2014 and 2016, and together would excel as a full opera.  The production marries ambition and underground ethos as a carefully studied, grass roots display of mixed genre extravaganza.

The first act, Cosmonauts on the Moon, discusses the former Soviet Union’s failed mission to the moon, a casualty of political manipulations that strained the mission before it was technically mature. Lunar Modules describes details of the development of the US Apollo 11 rocket and its lunar module that landed on the moon in 1969, thanks in part to software engineer Margaret Hamilton. First Women in Space compares stories of Soviet astronaut Valentina Tereshkova and American space pioneer Sally Ride. As a whole, the opera covers historical territory in a way that is coherent, entertaining and metaphorical.

Both sides lost astronauts and cosmonauts to terrible oxygen-fueled fires, both experienced massive, fatal explosions and both sides faced the terror of the unknown beyond the Earth’s atmosphere. The USA and USSR were, through their enmity, unable to share fully anything that might genuinely assist what might be called a truly global [international] scientific space project. Space Programs were framed as singular, national, geopolitical events with heavy military overtones. 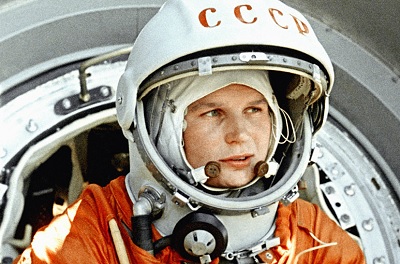 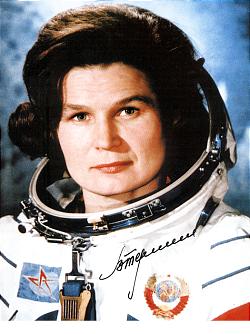 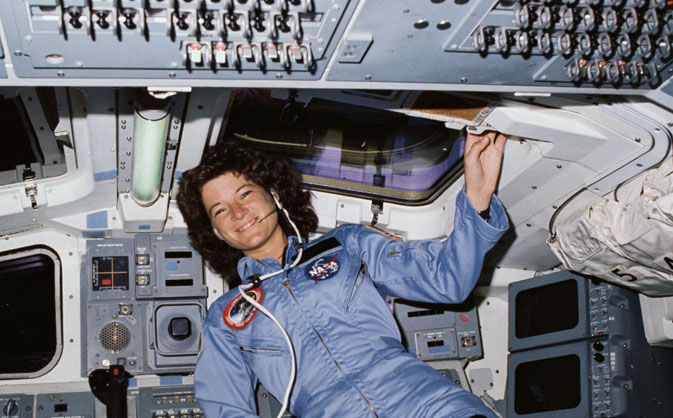 Musically, the operetta slides between moody art rock, 60s psychodelia and jazz. It features songs with titles such as Institutional Inertia and Flames Appear, all delivered with heavenly, classically-trained vocals against a backdrop of fiery video montage. It would thrive in a full production, with more gestural shape, blocking, and a bigger stage. After all, what would be a more suitable topic for the epic scale of opera than two competitive superpowers vying for landmark discoveries in the astral realm?

Check out this in-depth interview of David Cox: https://motherboard.vice.com/en_us/article/rocket-opera-pays-homage-to-women-of-the-space-race

Rocket Opera: An Operetta in 3 Parts by David Cox.

URL for the opera: 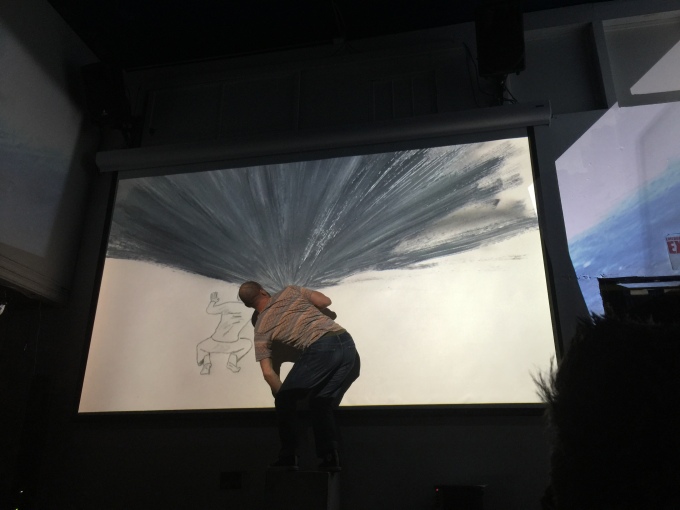 ATA Gallery was stuffed to the gills last night with an audience eager to injest a program of high caliber, mostly local animation work. Politically-tinged experimental shorts introduced the show, then Jeremy Rourke transported us through dreamy ruminations of his shifting studio coordinates in Goodbye Cole/Hello Tunnel. Cutouts of vintage imagery, postcards springing into action, and layers of clay, video, and pencil peeled off into nested realities. Adding spoken word, song, and guitar, Rourke jumped on and off a podium to interact with the projections in surprising ways. With exuberant splash, his inventions brought the audience to cheers. I highly recommend you look out for more performances of Jeremy Rourke, possibly next season at Other Cinema! 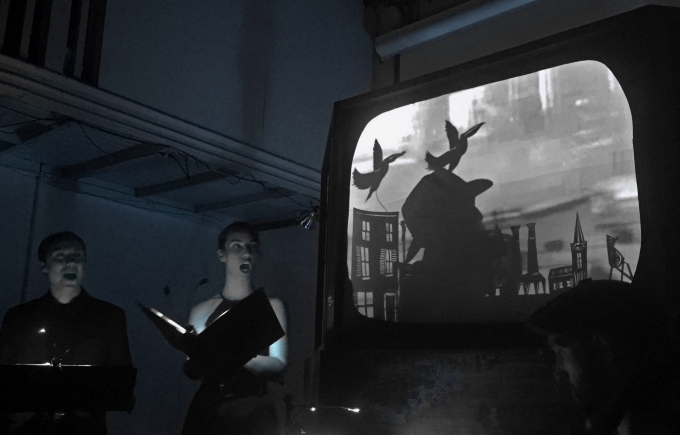 Facing West Shadow Opera then performed an ode to Walt Whitman, celebrating links between opera and nature in the settling of the Wild West. Two opera singers and a cello gave a flawless classical performance. However, music outpaced the visuals. Delicate and beautiful shadow puppets required surer hands and precise direction. At times their movements felt more awkward than graceful. The narrative, with bulky intertitles, fell flat.

The Academy Award nominated short Last Day of Freedom, directed by Dee Hibbert-Jones and Nomi Talisman, concluded the program with a somber note. It told the story of Manny Babbitt, a traumatized Vietnam war veteran who ended up on death row through a tragic miscarriage of justice. The pencil drawn animation and rotoscoping of the veteran’s brother sensitively expressed this disturbing story. 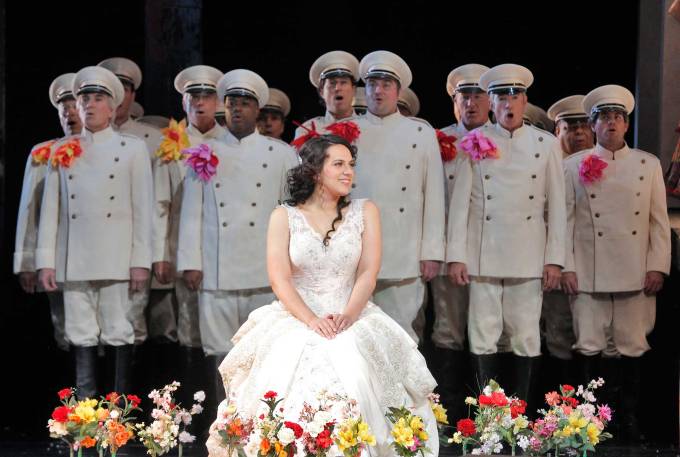 My second San Francisco Opera in a week and I find myself grappling with the art form –  complex gorgeous music couched in thin narrative, mediated through a foreign language (with subtitles), combined with acting, sets and costumes galore.  How to absorb it all?  Operas demand aerobic attention different from a symphony concert, the latter giving more room to simply listen, feel and find musical structure.   At the opera, when in doubt, follow the voice, for therein lies the glory.  The storyline provides, after all, a mere ruse for its ample play.  As such, tenor René Barbera (Count Almaviva)’s liquid ribbons of vibrato unfurled into the hall with such exquisite beauty, I found myself enthralled by their rippling power.

Yet the traditional plotlines irk:  men using their influence to imprison and trade women.  The ever-present heteronormative assumption.  The escapist romantic fantasies.  All these things a critical viewer must withstand.  But this Barber of Seville subverted these age-old shortcomings in subtle ways.  Rosina (Daniela Mack), the female lead and love object, plays the part sassy and rebellious, potentially capable of violence.  Berta (Catherine Cook), the heavyset house matron, smokes cigarettes like a man, flexes her muscles for the crowd during intermission, and comments on love with an earthy skepticism.  Overall Roy Rallo’s direction struck a lighthearted, irreverent tone to be embraced by modern audiences in one of the most beloved operas ever. 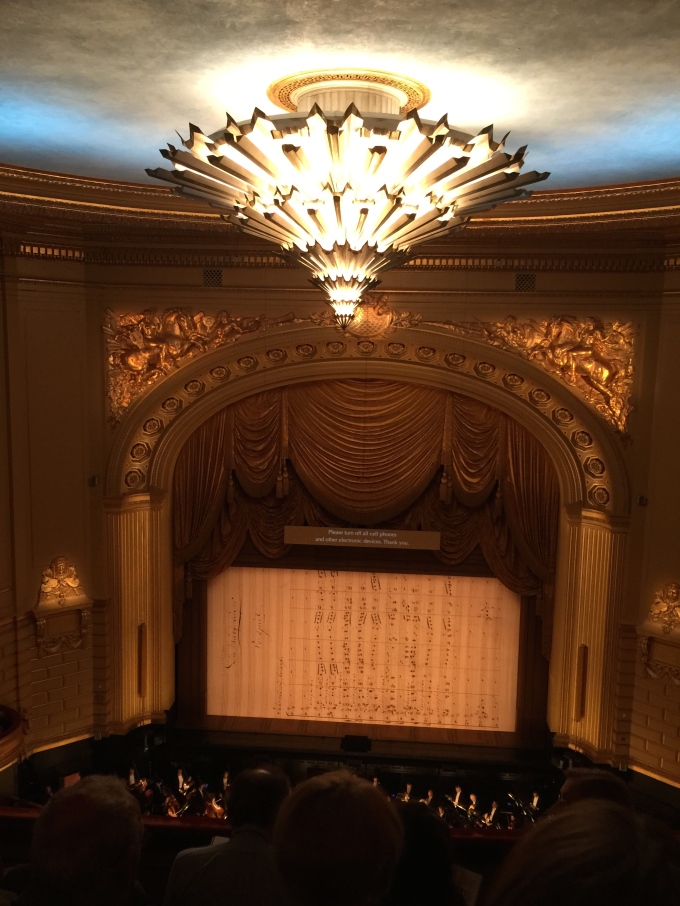 But where else in the Bay Area can you immerse yourself for five and a half hours in the greatest sounds in the world but the San Francisco Opera?  By the end of it you feel like you’ve learned a new language, the language of song.  This meta-tale about a singing contest between suitors of a young maiden was light and winsome, if you could stomach the 19th century chauvinism.  Rachel Willis-Sørensen’s sublime soprano luckily compensated, surging to an absolutely thrilling crescendo in the third act, bringing a much needed contrast to the jousting tenors and baritones who dominated the story.  Despite the plot’s celebration of archaic social values, the three acts and two intermissions rolled by easily, due to the captivating richness of the music .  Instrumental interludes supported an interesting theatrical excess:  lingering, playful, ambivalent gestures.  These non-verbal displays of favoritism, embarrassment, pride were quite charming, stalling the plot and filling up the stage while violin Wagner melodies caught up to the action.  A full layered finale included a chorus of a hundred caped and wreathed players thronging a public square for the final showdown between singing masters, a feast for both eyes and ears.